I've fallen down a super deep Fediverse rabbit hole. It feels kinda like for the first time I can play around with stuff and not have my Extra Life videos just living on Twitch or Youtube. As a result, I've put up my own PeerTube instance up on vid.cthos.dev and am slowly moving the Extra Life videos there. They're going to stay up on Youtube as well, but here's a much better place to move things. Going to see if I can also make copies of my old talks, but odds are good I don't have the rights to reproduce them. In any case, here's a copy of my Sucker for Love run!

So thanks to the RSS Plugin for 11ty I now have these posts available via RSS! The feed is linked in the footer and is available at /feed.xml.

I intend to do the same thing to the reviews page just as soon as I finish up my headphone reviews page. Which I'll definitely do, one of these days....

Today I'm happy to reveal something I've been working on for the past month or so: an Icon Pack specifically for Old School Revival RPGs! This is something I've wanted to learn how to do for a while now, and I've been working on another OSR type project (which I'm hoping to reveal soon) and found myself looking for icon packs that I could use for dungeon maps. There were several candidates, but I could not find anything that I really liked.

So, to that end, I set about making some of my own! In the OSRaon Icon pack, we've currently got 64 icons across 12 categories. Several of these are variants on a theme (lots of 4-poster beds, for example), so the variety is a little sparse at the moment. However I'll be adding more icons over the coming months. I'm a bit of a novice at this though, so maybe don't expect artful mastery. But if you like what you see, and want simple/clean icons, this might be the icon pack for you.

Here's a preview image of a subset of the icons (potato quality for reasons): 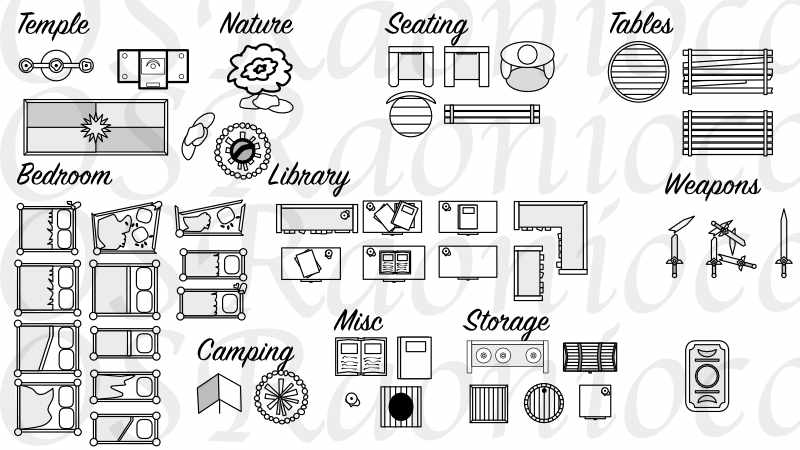 The package itself includes all the icons in .png or .svg format, as well as an Affinity Designer assets file for importing to Affinity.

If this sounds like something you'd be interested in, the best way to acquire it during its beta release (aka, now) is via my Extra Life page at https://www.extra-life.org/participant/cthos and making a donation. It's in the incentives column. This will get you access to the package as well as any future updates (if you give me your email address).

I ran across something while working on updating Stencil tests to use puppeteer, and figured I'd put it down to paper while I'm thinking about it.

In order to run puppeteer tests, a browser needs to be present. Now, you could probably install headless chrome in the linux subsystem (and also install a window manager because evidently puppeteer needs that in order to do some of the tests) - but that seemed a little dirty. When I was running with karma I simply set the $CHROME_BIN environment variable to point at '/mnt/c/Program Files (x86)/Google/Chrome/Application/chrome.exe' - so that Karma will use the browser already installed on the Windows side of things. That interop works fine, so I figured I should go ahead and get that working in Stencil / puppeteer.

The config is relatively straightforward, but I did have to go digging in the source to figure out exactly what params to set.

Turns out it's just 2 things that need to be added to stencil.config.js:

Hey there! Long time no see.

I've been super busy doing stuff that isn't working on my personal site that I've not had any time to update it whatsoever. But since it's the holiday season and I have some time, I figured I'd rewrite it in Eleventy. Turns out it was super easy to convert from Metalsmith to Eleventy, thanks to the static blog starter. It did a huge amount of the work for me.

Over the next...whenever I can make time for it.... I'll be updating the styles to not look like the site was made by someone who has zero eye for design (it me!).

Also! The site is now deployed on Netlify, which was super easy to set up. Like, 2 commands and it's running easy. Even integrates with my private gitlab instance. So good.

So! I've not actually posted about this, but I've launched a small iOS app GW2 Assistant.

Since then, we've had some issues with the local cache never clearing and the app not updating data. Because of those issues and the fact that Ionic 3 is hitting beta shelves, I'm in the process of completely rewriting the whole thing. This time, we're using redux to pass information around and persist - and leveraging some of the new quirks of Ionic 3 to hopefully tamp down on some of the issues.